Marx Show
Most recently this has been happening at focus E15 and as far afield as the Bergen Assembly in Norway with the Capital Drawing Group.
What is Capitalism and Where is it Taking Us? Part 1 from andrew cooper on Vimeo.
see also - Marx Show 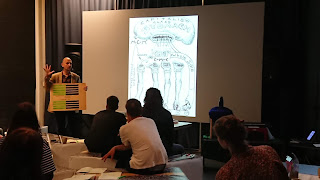 photo thanks Sara Kollstrøm Heilevang
Andrew has been presenting the ‘Marx Show’ show over the last five years, he is continuously evolving this show, informed by his experiences of groups (such as Focus E15) who are taking serious action in the community and often inform and contribute to his performances. He has thirty years experience of working as an artist and  art teacher in East London.Andrew’s Marx show is an interactive and often humorous way of communicating the essential aspects of Marx’s Capital, the experience of the show creates a door inviting  people to look at their everyday life experiences with work, money, housing and more.The work speaks to the great many people are experiencing the grinding truths of their exploitation, and it exposes the super exploitation of our fellow humans, in many countries which feed investments of the super rich and even the infrastructures here.The use of strange, images fun and humour is used as a way to provoke enquiry in the audience and it liberates the energy necessary to see clearly and change things.

Projected drawings and animations often evoking gothic horror are used to take us on a journey through the “mystery” and misinformation that normally masks the capitalism which we are enmeshed in, revealing what is behind appearances. Characters with names like ‘E-Con-Money’ snap at you, they  are reminiscent of the crocodile in Punch and Judy shows and (showing homage for this aspect of culture), mediumistic wooden puppets made from domestic timber, with grotesque wooden brains talk and squirt water. The flamboyant wooden characters aim to uncover the forces that shape our working and living conditions, which can often be experienced like a confusing fairground ride in life, but with but with real constraining  consequences that we have respond to survive in this system.

“I was truly inspired by Andrew Cooper’s illustrations and talks on Karl Marx and capital. I had taken a massive interest but have always found it difficult with reading, i often watch videos to help take things in but the drawings were really able to catch my mind and help my understanding. I find the artwork absolutely fascinating and feel the complicated systems and theories are expressed in a way that clicks with my brain and outlook on the world. Looking at a visual description is so much more effective Andrew’s work is truly amazing and helped me to realise the way i process information. I wish every piece of information i read came with illustrations like this!”Jasmine Stone ,one of the founders of Focus E15 housing campaign

2013 ‘Communist Gallery’ at the Bank of Ideas occupation (as part of a huge  public protest in response to 2007/8 economic collapse) in UBS building. Owing to the conversations at this time with people protesting a call out was made  for a  reading group for Marx’s Capital.  Owing to eviction of the occupation  the reading group had to take place in the Cafe at Royal Festival hall , one of few free places to sit indoors in London. I started to produce drawings as i’m a slow reader of this material and find it easier to visualise to help understanding and to talk about what was being learned. From this a group called the Capital Drawing Group developed of artists interested in illustrating Marx and I have developed these ‘shows’ with people and groups mentioned as a way of engagement.

-Focus E15 Housing Campaign series of 3 -What is Capitalism and Where is it taking us  with writer and activist Eric Ogbogbo
(thanks to Judy Watchman for text and edits)
Posted by Andrew Cooper at 08:14